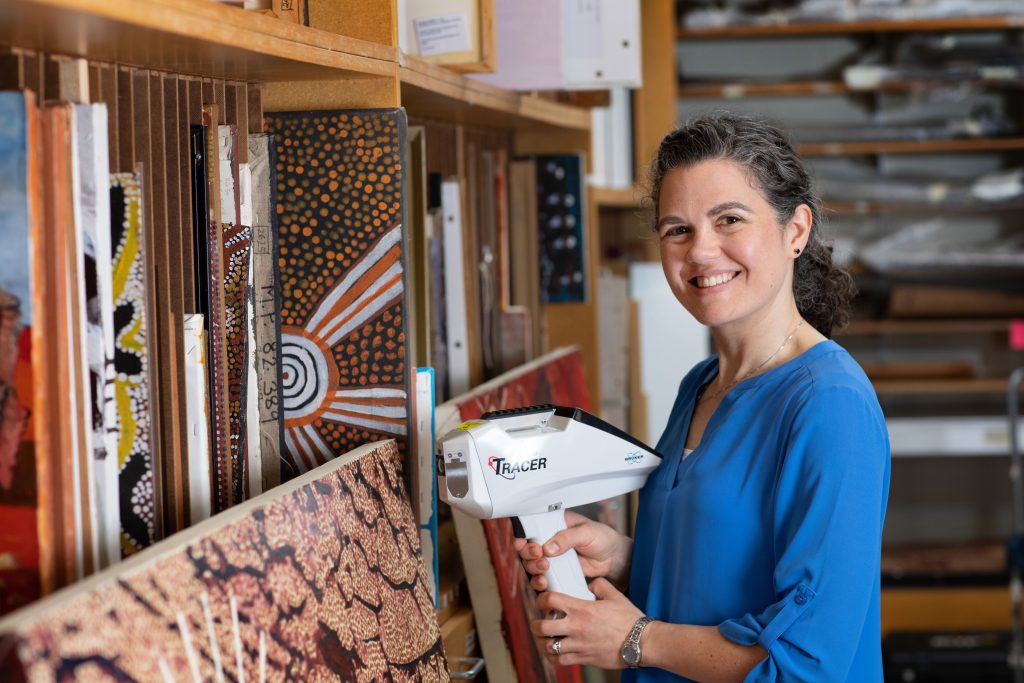 After studying a Bachelor of Arts in Archaeology and Classics at Washington University in St Louis, Dr Popelka-Filcoff obtained her PhD in Chemistry from the University of Missouri while on a National Science Foundation Fellowship. She followed this with a position at the National Institute of Standards and Technology (NIST, USA), and then to her most recent position as Associate Professor in the College of Science and Engineering at Flinders University, where she was an Australian Institute of Nuclear Science and Engineering Research Fellow from 2010- 2016.

Dr Popelka-Filcoff has developed several innovative, high-resolution, high sensitivity and in many cases non-destructive methods for the analysis of cultural objects to re-create ancient exchange routes and to understand technologies lost to time.

“Pigments are regularly utilised in a variety of material culture and form the basis for provenance studies and therefore contribute additional data to archaeological science questions,” says Dr Popelka-Filcoff.

“Through my studies of characterisation of natural mineral pigments I have enhanced the advantage of pigments in archaeological science studies as well as developed methods that can be used in several contexts, including rock art.”

“I look forward to developing new research and teaching projects towards the development of novel methods complementary to the well-established archaeological science at the University of Melbourne, to help us to understand our common past,” Dr Popelka-Filcoff says.

KFA Chairman, The Hon Laurie Brereton, says the appointment represents an important milestone for the Foundation. “This Chair cements the leadership role Australia has taken in rock art research. We are grateful to KFA Patrons Andrew and Nicola Forrest, to Allan Myers and The University of Melbourne. They have backed KFA’s vision to deepen our understanding of the ongoing story of Australia’s earliest human habitation. Our own heritage. This is first and foremost a story belonging to Australia’s Aboriginal people, which we are researching and promoting.

The University, Australia’s Indigenous people, and all Australia will reap the rewards of the international collaboration that will follow.”

Dean of Science at the University of Melbourne, Professor Aleks Owczarek, says “Rachel brings significant scientific expertise and great energy to this role, and I am very much looking forward to seeing Melbourne grow as a leading hub of archaeological science in Australia under her leadership,” he says.

“I am particularly excited to see the scientific understanding of our country’s ancient and proud Indigenous heritage shared with the world through new and existing partnerships with Indigenous groups, along with the support of the Kimberley and Minderoo Foundations.”

Among her honours and achievements, Dr Popelka-Filcoff was named the South Australian Tall Poppy of the Year in 2012 and was president of the Society for Archaeological Sciences from 2016-2019.