There are a number of accessible sites along the Gibb River Road. In most cases they can be found around the numerous gorges where there are usually signposted bush walk tracks leading to a waterhole, e.g. at Adcock Gorge, Lennard Gorge, Galvins Gorge, Manning Gorge and Barnett River Gorge.

Further north on the Kalumburu Road/Mitchell Plateau Road there are two excellent sites known as Munurru with both Wanjina and Gwion (formerly known as Bradshaw) figures. We suggest you purchase the book by David M Welch called Aboriginal Paintings at Munurru. His book can be found in local bookshops or at Roadhouses along the way.

Rangers and guides at Kalumburu are sometimes willing to take tourists out to their art sites. This can only be arranged once you are in Kalumburu and there are traditional owners available. There is also a local art gallery where the artists sell their paintings.

El Questro, on the Pentecost River has some sites, but it is only permissible to access these sites with the traditional owners. There is no access for visitors to view rock art on Drysdale River Station, Doongan or Theda Stations.

Rock art enthusiasts and bush walkers should contact the Kalumburu Aboriginal Corporation for permission to visit the Drysdale River National Park. Custodians of the DRNP are the Balangarra people.

For information on recommended tours featuring rock art we suggest Jilinya Adventures.  Francis Woolagoodja is a Worrorra man who comes from the Oomeday (Horizontal Falls) and Mulendom (Prince Regent River) regions of the West Kimberley and is the owner and operator of Jilinya Tours. Jilinya is operating day tours from Cape Leveque to Horizontal Waterfalls +7-day overland hiking trips. Their focus is on cultural tours, teaching about Wandjina; all guides are Dambimangari people. They are offering a Rock Art by Air adventure as well as taking expressions of interest from serious and experienced adventurers to join them on treks overland through Worrorra country. Visit their website at https://www.jilinyaadventures.com.au/about-jilinya

There are many tours that don’t feature rock art. At Kooljaman, Cape Leveque the man to see is Brian Lee. Join one of the Kimberley’s most colourful characters on an adventure based around the turquoise waters of Hunters Creek. https://www.kooljaman.com.au/tours/hunter-creek-tagalong

For additional  visit related links on our Region tab.

KFA receives many enquiries about visiting these ancient rock art galleries. Most rock art sites are not accessible to tourists. They are situated on Crown Land, Aboriginal Reserves, Pastoral Leases or Special Leases and Department of Parks & Wildlife estate. Permits are typically required for visitors wanting to go out on country and see rock art. If you plan your itinerary well in advance many of the Aboriginal communities have websites and permits can be purchased on line before arriving.

There are two clusters of rock outcrops near the King Edward River Crossing on the track to the Mitchell Plateau. The Wunambal people know this area as Munurru, the borderland between their tribe (language group) and that of the Ngarinyin people to the east of Mungara, the King Edward River. Today, Wunambal people live at Kandiwal and Kalumburu to the north and around Derby to the east.

The first rock cluster is located 700 metres after crossing the King Edward River heading westward, and the second cluster is approximately 4.5 km along the Mitchell Plateau track after leaving the river, heading north-west. For the purpose of describing the rock art at these clusters, they are referred to as the Wanjina Complex and the Brolga Complex, respectively. Each of these complexes contains a number of rock art sites, and each site contains one or more art panels.

This area of the Kimberley consists of open woodland on flat to gently sloping ground. Access to the Munurru sites is seasonal because this part of Australia lies within the tropics. Art motifs found at the Munurru sites include Wanjina deities, ceremonially decorated human figures (Gwion paintings) and plants and animals occurring in the landscape. 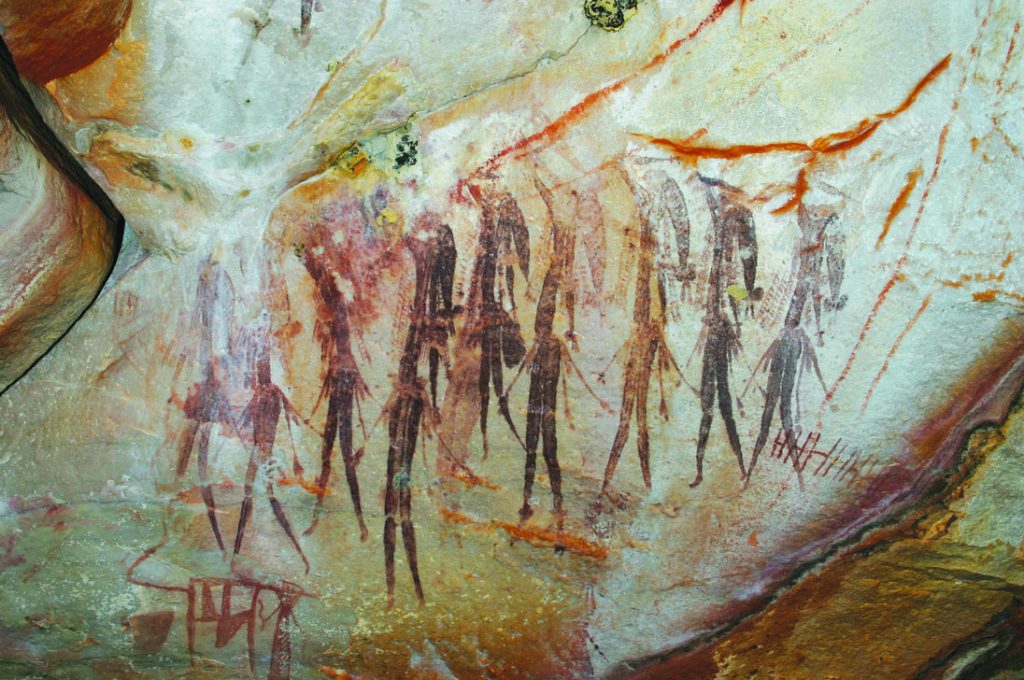 The work of the Foundation allowed me to learn about the history and stories behind each of the artworks, giving me a different perspective of the Australia I thought I knew and the incredible history behind it. Knowing that the Foundation is working to understand the rock art and preserve it for the future, brings about a sense of gratitude: that I was given a chance to see it and future generations will be able to as well.
Nai Yan (Jason) Yeap, Chairman, Mering Corporation, KFA supporter