KFA researches, preserves and promotes the rock art of the Kimberley.

KFA is a research organisation which takes a multi-disciplinary scientific approach to understanding Australia’s deep history of Aboriginal culture and environmental change to establish their importance in the global narrative of human origins.

These elders were concerned that their culture, their law and traditions were being lost to future generations of Aborigines. They were neither known nor understood by other Australians.

“Our country is living, breathing life. Our land is reflected in us, and we are reflected in the land. Our past, present and future is all in the land, from creation time to future time – all at once.” David Bungal Mowaljarlai OAM (c.1926-1997)

They approached Kimberley Foundation Australia Director Susan Bradley to encourage people of influence to visit the Kimberley so that these old men could share stories of their country. Susan brought in fellow KFA Director Christina Kennedy and the ‘Bush University’ was formed. People from all walks of life came to the North Kimberley to experience the power and spirituality of the Ngarinyin*, their land, their law, their art and their ceremony.

The Bush University eventually became known in 1997 as the Wandjina* Foundation. It was renamed the Kimberley Foundation Australia in 2002 to reflect its broader objectives.

“If we share the stories of our country with gudia (whitefella), then they will have our country in their hearts as we do, and they will understand and love it, and never damage it.” David Bungal Mowaljarlai OAM (c.1926–1997)

The Kimberley Foundation Australia has been formally funding academic research in the Kimberley with leading scientists from multiple universities since 2007. The Ian Potter Foundation gave us our first significant grant that year to advance a Kimberley Regional Human and Environmental History Program. Since then KFA has supported a broad range of scientists from the fields of archaeology, geology, palynology, climatology, geochronology, and geochemistry to work in partnership with Aboriginal communities. The KFA itself does snot undertake research.

* The Wanjina people comprise three tribes: Ngarinyin (the largest group), the Worrora and the Wunumbal.

Andrew and I fully support the research work undertaken by the Kimberley Foundation Australia. Supporting their rock art dating project is an investment in Australia’s cultural heritage. The scale and wealth of expertise involved in the project is a world first. We encourage you to support their work and contribute to the long-term protection of Kimberley rock art. 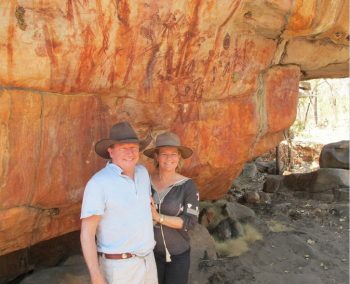 KFA patrons Andrew and Nicola Forrest at Kimberley rock art site.
A timeless land with the rock art taking our thoughts back to the earliest habitation of our country. We experienced the silence, the beauty and vastness of the land and appreciated the explanations and the prospects of exciting information from break-throughs in scientific data in the Kimberley Foundation's dating camp.”
Charles Goode, Chairman, The Ian Potter Foundation